Blood Moons: Could they be signs of “the End of Days?” 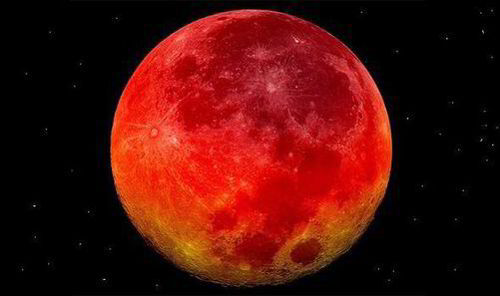 IF YOU’RE feeling out of sorts today don’t worry, it isn’t just you.

The King James Bible predicts: “The sun shall be turned into darkness, and the moon into blood, before the great and the terrible day of the LORD comes,” [Joel 2:31].

And, according to NASA, a highly unusual ‘Tetrad’ – four successive total ‘blood-red’ lunar eclipses each followed by six full moons – will, indeed, start next Tuesday and finish on September 28 2015.

The incredible alignment has only happened a handful of times in the last two thousand years but, remarkably, on each of the last three occasions it has coincided with a globally significant religious event.

The first Tetrad since the Middle Ages, in 1493, saw the expulsion of Jews by the Catholic Spanish Inquisition, which rocked western Europe.

The second coincided with the establishment of the State of Israel – after thousands of years of struggle – in 1949.

Strangely, the last one occurred in 1967 – far earlier than expected – precisely at the time of the Six-Day Arab–Israeli War.

While NASA has confirmed the astrological validity behind some of the claims, not everyone is convinced the Tetrad means anything at all, let alone the End of Days.

“An eclipse on Passover night seems wildly improbable, but we should remember that lunar eclipses only happen on full moons and that Passover by definition always takes place on a full moon. Sukkoth (The Feast of Tabernacles) also by definition coincides with a full moon.

“I thought in 2011 we all said we weren’t going to fall for this again, when Harold Camping twice missed the date of the Second Coming?

Try as we might scripture is clear on this:

“No one knows when that day or hour will come. Even the angels in heaven and the Son don’t know. Only the Father knows. Matthew 24:36 (GW)

Whether the blood moons are signs of the coming “End of Days” or not, no one knows how many days each has on this earth so let’s make each day count for the Lord shall we?

This entry was posted in Articles
« when a “good girl” meets the gospel.
Sexual Atheism: Christian Dating Data Reveals a Deeper Spiritual Malaise »