Christianity, the World’s Most Falsifiable Religion 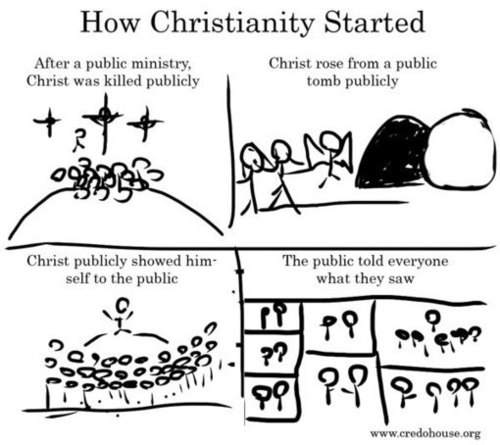 1 Corinthians 15:14-17 (AMP)
14  And if Christ has not risen, then our preaching is in vain [it amounts to nothing] and your faith is devoid of truth and is fruitless (without effect, empty, imaginary, and unfounded).
15  We are even discovered to be misrepresenting God, for we testified of Him that He raised Christ, Whom He did not raise in case it is true that the dead are not raised.
16  For if the dead are not raised, then Christ has not been raised;
17  And if Christ has not been raised, your faith is mere delusion [futile, fruitless], and you are still in your sins [under the control and penalty of sin];

The central tenet of Christianity is that there was a Jesus Christ who was born, suffered, died, was buried, and rose again, to later ascend into heaven. He was seen by many witnesses after he rose from the dead. These were eyewitness accounts of his resurrection who later went about telling others what they saw for themselves.

After Jesus was crucified we must note that the disciples were discouraged and afraid because they hid themselves in fear that they too would be next to be crucified by the Romans. When the women went to the tomb to anoint the dead body of Jesus they found the tomb to be empty. There they were met by angels who asked them why they where looking for the living among the dead.

They did not believe that Jesus would actually come back to life even though he told them he would. They were expecting to find a dead body not an empty tomb.

When the women went back to the disciples to tell them that Jesus was indeed risen, they too did not believe. Peter took it upon himself to run to the tomb to see for himself. He found the tomb empty and the grave-clothes folded neatly, but was unable to grasp what it all meant.

Luke 24:1-12 (KJV)
1  Now upon the first day of the week, very early in the morning, they came unto the sepulchre, bringing the spices which they had prepared, and certain others with them.
2  And they found the stone rolled away from the sepulchre.
3  And they entered in, and found not the body of the Lord Jesus.
4  And it came to pass, as they were much perplexed thereabout, behold, two men stood by them in shining garments:
5  And as they were afraid, and bowed down their faces to the earth, they said unto them, Why seek ye the living among the dead?
6  He is not here, but is risen: remember how he spake unto you when he was yet in Galilee,
7  Saying, The Son of man must be delivered into the hands of sinful men, and be crucified, and the third day rise again.
8  And they remembered his words,
9  And returned from the sepulchre, and told all these things unto the eleven, and to all the rest.
10   It was Mary Magdalene, and Joanna, and Mary the mother of James, and other women that were with them, which told these things unto the apostles.
11  And their words seemed to them as idle tales, and they believed them not.
12  Then arose Peter, and ran unto the sepulchre; and stooping down, he beheld the linen clothes laid by themselves, and departed, wondering in himself at that which was come to pass.

Had the story stopped there than anyone could hypothesis a scenario about what actually happened at that empty tomb, but the story does not end there because Jesus made it a point to show himself alive to his disciples and many others. These first-hand witnesses then went about telling others of this miracle.

There are still many today who do not believe that Jesus was and that he actually loved them enough to be willing to die for them. But to us who have had an encounter with the living Christ know for a certainty that Jesus is alive and well and His spirit lives within all of those who believe and receive his gift of salvation through faith.

8 Responses to Christianity, the World’s Most Falsifiable Religion

« The 16th Amendment as originally proposed did not tax earned income.
Jars of Clay Frontman Comes Out in Support of Homosexual ‘Marriage’ »