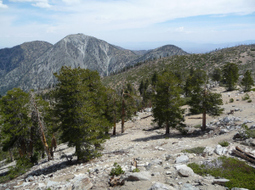 Who knew that Obama would speak and the San Gabriel Mountains would spring up as a NATIONAL MONUMENT. I wonder if somewhere in these 540 square miles will Obama’s likeness be engraved in the granite rocks faces?

Isn’t just like mankind to try to take ownership of something they had absolutely nothing to do with? I mean God made these mountains and if anyone is going to declare them a NATIONAL MONUMENT you would think it would be God himself. The real story though is now that the Federal government has declared this space SACRED in holy, it and only it can say what activities  can take place on this now sacred land.

For example I am sure mining for rare-earth minerals will be forbidden as well as any other mining activity. Logging and land development will also be curtailed because of the endangered species that may or may not be living their.

So let it be decreed and let it be known from now and henceforth for evermore, the San Gabriel Mountain range is NOW a NATIONAL MONUMENT. Before it was simply a mountain range.